The publication's practical features include: articles on current topics, country surveys reflecting important new legislation and amendments to existing legislation per country, the text of a selection of documents and important court cases, a Notes and News section, and book reviews.

The rule of law in the Middle East and the Islamic world : human rights and the judicial process 7 editions published in in English and held by WorldCat member libraries worldwide Since the Universal Declaration of Human Rights much attention has been focused in an international standard on human rights applicable to all cultures.

This text examines the predicament of the Muslim world. In this country-by-country survey a range of distinguished scholars explore how the concepts of "the Rule of Law" and "Human Rights" are being debated and applied in the changing social and political climates of Egypt, Iraq, Kuwait, Jordon, Palestine. Conference held in London, June "--Title page verso. Democracy, the rule of law and Islam Book 3 editions published in in English and held by WorldCat member libraries worldwide Zaheeruddin v.


Surveying Iran, Saudi Arabia, Lebanon, Egypt and Arab societies in general, the essays in feminism and Islam focus on such subjects as crimes of honor and the construction of gender in Arab societies; law and the desire for social control; women ad entrepreneurship; family legislation; and the political strategies of feminists in the Islam world. Human rights and democracy : the role of the Supreme Constitutional Court of Egypt Book 7 editions published in in English and held by WorldCat member libraries worldwide.

Yearbook of Islamic and Middle Eastern law Book 1 edition published in in English and held by 6 WorldCat member libraries worldwide. These appear to control dissent, opposition and violence through competitive open access to organisations and institutions, founded on a more meritocratic and egalitarian theory of justice, conducive to adaptability and economic growth.

ANALYSIS: Promoting a Rule of Law Culture in the Middle East and North Africa Region

The finely balanced peace of natural societies — built on grace and favour, personality cults, the divine right to rule and so on — is personal in nature. Open access orders are far more inclusive and impersonal. This makes for greater societal stability, contrasting with the volatility of natural societies, which are more easily convulsed by climatic shocks, demographic and technological change, military intervention and so on, and may lead to a descent into armed conflict, as seen in the former Yugoslavia, Rwanda, Somalia, Chad, Iraq, Mozambique and Sudan.

Mature natural states, such as modern day India, Brazil, Argentina and Mexico, on the other hand, have a far more developed meritocratic private sector, have a greater resilience to change and tend to generate more wealth.

E merging economies, such as Mexico, Indonesia and Russia — with their judiciaries, general elections, political parties and markets — appear to be open access orders, but lack inclusiveness, competition and perpetuity. The last of these is the aspect of the rule of law that is critical, but often neglected, and without which there can be no certainty of the law, no equality before the law and no absence of arbitrary abuse.

Perpetuity is a fundamental issue in Russia. Russian reporters writing about Chechnya, organised crime, state officials and big business have been killed, while hundreds of others were indicted on various criminal charges. Just as the Russian ministry of justice prepares more far-reaching proposals for judicial reform, public information on the activities of the courts has been so severely restricted, court reporters now complain that an essential anti-corruption element in the system has been removed. 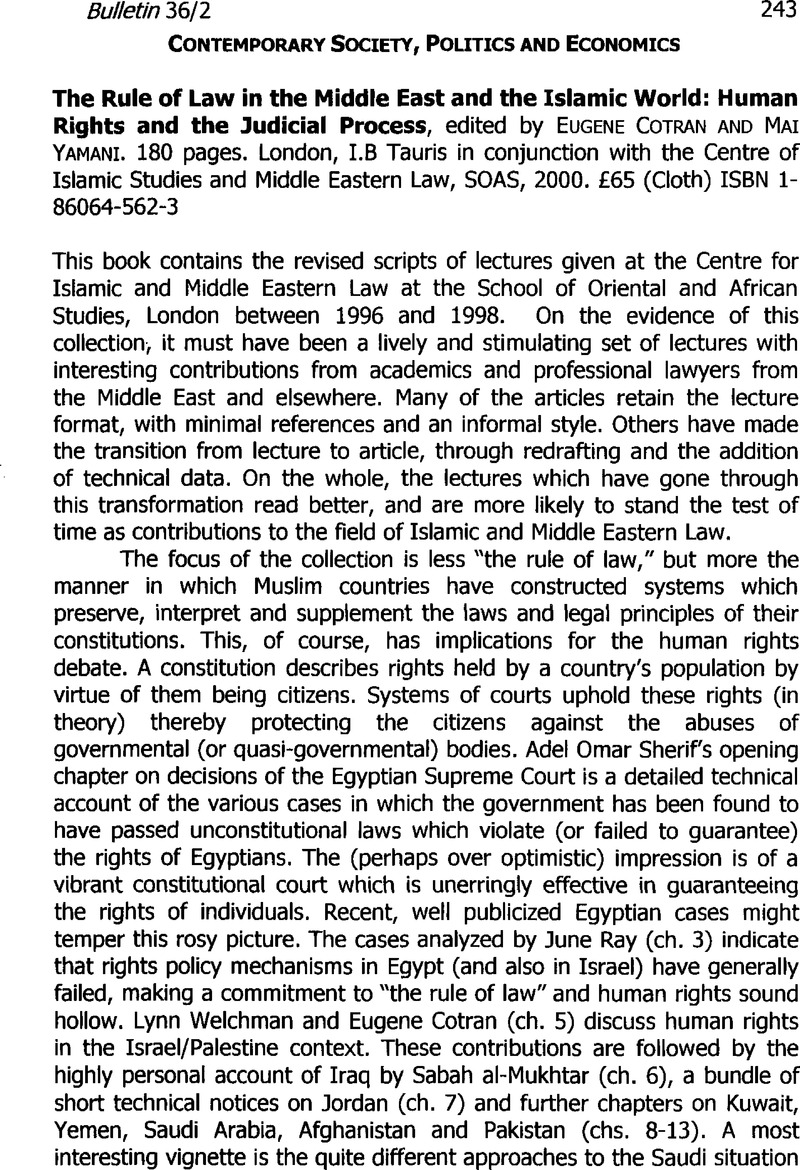 Mature natural states such as Argentina, Brazil, Chile, Indonesia and India appear to foster the rule of law. But, beneath the veneers it is perfectly possible that constitutions are being subverted, corruption is rampant, government abuse is pervasive and civic rights — such as freedom of speech and the press that help reinforce the rule of law — are undermined. Accordingly, democratic control of both the police and the military is one precondition that is vital in making the transition to an open access order and the rule of law.

It is not at all unusual in such countries for the judiciary, police force and public prosecution service to have been in thrall to an autocratic natural state regime, such that concepts of equality before the law and serving the public are so entirely alien that corruption compromises principles of justice where political intervention once did.


In his bid to hang onto power, he has also conferred on himself the right to dissolve parliament, had a former prime minister arrested, jailed journalists and is increasing his control over state media. Similarly, after 23 years in power, President Robert Mugabe of Zimbabwe, probably the most infamous of the octogenarians, has attempted to legitimise his three-decade grip on power through elections; but these are reportedly subject to vote-rigging and extreme violence.

Weingast concludes that the transplanting of rights, rules and institutions from open access orders into natural states is unlikely to work while the basic structure of the latter remains unaltered.

A transitional period of structural change must be undertaken. In Africa they include, South Africa, Botswana and Ghana and there is a good prospect that Egypt under a new constitution about to be fashioned will also be numbered among them.

The World Bank has acknowledged the challenges of establishing rule of law programmes, and suggested solutions. Lack of expertise to bring about legal change in developing and post-conflict countries, compounded by an inadequate evaluation of programmes, is one of the reasons the Bank cites. Progress is also hampered by an emphasis on the provision of, what often turn out to be empty institutional shells lacking the personnel with integrity and values who are able to understand and enforce legislation, while upholding rights. Because it can take considerable time to train judges and build judicial capacity, the easier and more tangible option of constructing buildings and equipping becomes the focus for donors.

Programmes need to address pressing issues that are most likely to reap results, such as why judges continue to be corrupt, inconsistent and biased. H owever, the World Bank suggests that the most likely way to generate solutions is through holistic engagement.

Establishing rule of law requires deep societal changes, but these can only be effected if the population comprehends them, assents to them, and is instrumental in implementing them. For this reason, the technically driven approach of lawyers who aspire to mimic Western systems is deemed unlikely to succeed, particularly where the local social dynamics are ignored. Political pressure for reform from local players imbued with certain ethics and beliefs in their role in society is viewed as essential if reform is to be effective and sustainable.

Thus, key stakeholders, such as NGOs, the business and legal community — indeed, civil society in general — as well as the authorities, must be seen to embrace the outcomes sought. It is important that it is not seen as foreign. Likewise, particularly with the Arab world in a state of flux, the process of designing a new constitution should be seen as an opportunity to negotiate divisive issues and bring factions together to determine a future vision for the state. An inclusive and participatory national dialogue of this type adds legitimacy and local ownership and is more likely to result in a democratic constitution.

The role of the media in this process, through consensus building, facilitating dialogue changing expectations and norms, and making public the abuses of those in power, can go a long way to helping are reinforce the rule of law. Key to societal transformations of this type is time, commitment and inclusivity, as well as a thorough understanding of and sensitivity to the history, culture and social dynamics of the country concerned. The quick, top-down, externally-imposed fix can never be a viable option. I Nasser assumes presidential office, whereupon the Muslim Brotherhood deploys its military wing.

By nationalising the Suez Canal, Nasser triggers a military invasion by Britain. Opposed by the Americans, the invasion turns into a debacle for the British. All political opposition is violently crushed and the country comes under a new hegemony, from the US. Despite dogged determination to hang onto power, he is finally toppled on 11 February. This could bring to an end 2, years of foreign hegemony. Frank Richardson is a freelance journalist.

He can be contacted by e-mail at frank. Rule of Law: an elusive panacea - Frank Richardson. Thursday 8 September Behind the BRICs. I ts current vogue may give the impression that the general concept of the rule of law is exclusively modern. Nor is the concept in any way exclusively European. Despite our current perceptions of countries, like Iraq, with majority Islamic populations, prior to the 12th century not even the caliph was deemed to be above Islamic law. The enormity of the task. Not the preserve of the West. Russia: Mikhail Khodorkovsky. Putting down dissent. Not amendable to the rule of law.